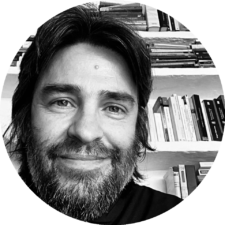 He studied Buddhism in India, Nepal and Sri Lanka. He was the first Argentinean monk ordained by H.H. Dalai Lama. For 7 years he translated the teachings of His Holiness in McLeod Ganj, India, and meditation courses in Kopan Monastery in Nepal for Spanish and Latin American students. He received teachings from great Buddhist masters: H.E. Kyabje Zopa Rinpoche, Kirti Tsenzab Rinpoche, Denma Löcho Rinpoche, Lati Rinpoche, Rilbur Rinpoche and Tulku Urgyen. He was also instructed in the meditative practice of the Theravada tradition by master Godwin Samararatne.

Since 1998, she has been teaching courses in meditation and Buddhist philosophy, as well as university courses in ethics, political philosophy and contemporary philosophy in educational centers in Asia, Latin America and Europe.

Between 2012 and 2015 he taught social and political philosophy at the Faculty of Philosophy and Theology of San Miguel (Colegio Máximo) where he came into contact with Latin American Liberation Philosophy through Enrique Dussel, Juan Carlos Scannone and Enrique del Percio.

He currently teaches in the Master’s Degree in Humanities: Contemporary Art, Literature and Culture and in the Master’s Degree in Philosophy for Contemporary Challenges of the Humanities Department of the Universitat Oberta de Catalunya (UOC). He teaches undergraduate, graduate and master’s degrees at the Institute of Religious Sciences of Barcelona (ISCREB-Universitat Ramón Llull),

He is a member of the research groups “Grup de Recerca en Ètica economicosocial i Epistemologia de les Ciències Socials” (GREECS) of the Department of Sociology of the Faculty of Economics and Business of the University of Barcelona and “Historia de las Religiones” (HISTOREL) of the Department of Geography and History of the University of La Laguna.

He is the author of Miseria planificada. Derechos Humanos y Neoliberalismo (Planned Misery. Human Rights and Neoliberalism), Charles Taylor and Modern Identity and Dimensions of Experience. Introduction to contemplative practices (in edition), as well as numerous academic articles.

He writes the political blog “Claro del bosque. Apuntes de Filosofía y política” in which he has published more than 350 opinion articles since 2008, some of his articles have been republished in various journalistic media.

If you continue to use this site without changing the settings, you consent to the use of the cookies. If at any time you change your mind, you can of course change the cookie settings in your browser. You can change your browser settings to disable cookies but it may affect your experience of this website.